ICE-HBV is organizing an virtual and interactive workshop on HBV biomarkers endorsed by the International HBV Meeting. The event is aimed at scientists, clinicians, pharmaceutical and diagnostic industry representatives.  The workshop, chaired by Anna Kramvis and Peter Revill, is put together by the ICE-HBV serum biomarkers working group. Both classic and future biomarkers will be discussed. The workshop will lead to a consensus statement on promising serum biomarkers.

The programme and registration system can be found here: https://ice-hbv.org/hbv-serum-biomarkers-workshop/

“The global burden of viral hepatitis is substantial; in terms of mortality, hepatitis B virus and hepatitis C virus infections are on a par with HIV, malaria and tuberculosis, among the top four global infectious diseases. In 2016, the 194 Member States of the World Health Organization committed to eliminating viral hepatitis as a public health threat by 2030, with a particular focus on hepatitis B virus and hepatitis C virus infection. With only 10 years to go until the 2030 deadline is reached, and although much progress has been made towards elimination, there are still some important gaps in terms of policy and progress. In this Viewpoint, we asked a selection of scientists and clinicians working in the viral hepatitis field for their opinions on whether elimination of viral hepatitis by 2030 is feasible, what the key areas of progress are and what the focus for the next 10 years and beyond should be for viral hepatitis elimination.”

ICE-HBV is celebrating World Hepatitis Day 2020 with this video on hepatitis B, please share to your networks.

ICE-HBV and Brown Dog Productions created this video in collaboration with the Doherty Institute, the Hepatitis B Foundation and the World Hepatitis Alliance, with support from its sponsors.

Despite the existence of an excellent preventative vaccine and antiviral therapies which effectively control the virus, chronic hepatitis B affects 257 million people and is one of the leading causes of death worldwide.  The global hepatitis B research community is working together with people living with hepatitis B to develop cures and many approaches are currently in early stage clinical trials.  Until these cures are available, it is imperative that people are tested and receive the life-saving antiviral treatment to control their HBV infection and prevent liver disease.

ICE-HBV encourages more people to get tested and treated for chronic HBV, and to let people living with HBV know that the global HBV research community is in their corner and is striving for a cure, so we can live a #hepfreefuture

ICE-HBV, The Hepatitis B Foundation and the World Hepatitis Alliance came together with many other stakeholders and agreed on the shortest route to HBV elimination. Check out their briefing here and use this in your activities with policy makers and lay audiences. 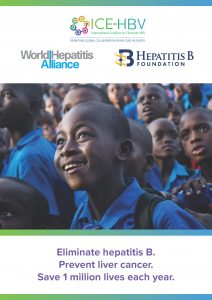 Today, the global mortality from viral hepatitis exceeds that of HIV, TB or malaria, and is likely to exceed the toll from those three diseases combined by 2040. Viral hepatitis elimination meets all criteria for inclusion in the UHC framework. However, today, start-up funding is essential.

Read the new WHO Report on our joint side-event at the Global Fund’s replenishement’s conference here. 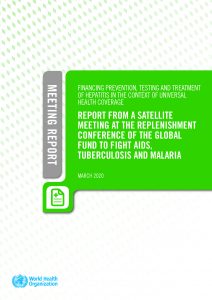 This is an opportunity to submit proposals for hepatitis B research. You can download the application and eligibility criteria at https://cdmrp.army.mil/funding/prmrp. Pre-application letters of intent are due by April 16, 2020.

This opportunity seeks to fill “scientific gaps needed to (a) inform HBV functional cure strategies by furthering our understanding of the interactions of HBV and HIV; and (b) advance the discovery and development of novel HBV interventions targeting HBV/HIV co-infection.” For more information, please visit: https://grants.nih.gov/grants/guide/pa-files/PAS-20-121.html

The US NIH just released a strategic plan to cure Hepatitis B. The plan includes a list of specific gaps in our knowledge that need to be filled to develop widely-effective, affordable, and deployable cures. The plan includes an intention to leverage existing NIH funds and programs to improve HBV research, as well as to increase funding for HBV studies in the future.

The NIH plan is fully in accord with efforts being promoted by ICE-HBV and the Hepatitis B Foundation.

Although the specifics of this plan apply to the US NIH, it is an excellent strategic guide for studies throughout the world that aim to accelerate HBV cure research.

Chronic hepatitis B, which is the leading cause of serious illnesses including liver cirrhosis and liver cancer, is a significant public health problem in the Asia Pacific region, affecting over 120 million people. It is estimated that fewer than 10% have been diagnosed, and less than 1% are receiving antiviral treatment. The World Health Organization has called for the elimination of hepatitis B as a public health threat by the year 2030. This can only be achieved through a massive increase in global prevention, public education and treatment and cure efforts that are undertaken in partnership with all concerned stakeholders, including those living with hepatitis B, with clear and agreed strategies to follow.

We support the recent strategic Roadmaps for HBV Cure from the Hepatitis B Foundation, International Collaboration to Eliminate HBV (ICE-HBV), and the World Hepatitis Alliance’s “Find the Missing Millions” campaign. We endorse the World Health Organization’s Global Health Sector Strategy on Viral Hepatitis 2016-2021, including the specific 2030 elimination goals that were agreed upon by all members of the World Health Assembly. To achieve these goals, we call for a substantial increase in government and industry funding dedicated for increased testing and molecular diagnostics, treatment and curative HBV research, and to facilitate equitable, affordable and universal access to an HBV cure within the next ten years.

The Melbourne Declaration was signed on October 5th 2019, by leaders of ICE-HBV, The Peter Doherty Institute for Infection and Immunity, the WHO Collaborating Centre for Viral Hepatitis, the Burnet Institute, the Hepatitis B Foundation, ANRS, Sidney Vo ( ommunity member) and was endorsed by the International Hepatitis B Meeting. 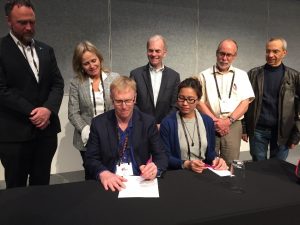 Categories Uncategorized
We are pleased to announce that the deportation of Ms. Sidney Vo from Australia just because she is chronically infected with HBV has been stopped by a last minute intervention of an Australian minister. Ms. Vo gave a powerful presentation at the Public Forum that was part of the HBV Meeting in Melbourne. In it, she described in very personal terms the impact that the stigma from being diagnosed with HBV can have. Ms. Vo’s appeal of her deportation order was supported by a world-wide publicity campaign, which included strong support from ICE-HBV, the Hepatitis B Foundation, and the HBV meeting organizers.
Ms. Vo’s situation is an example of the stigma and discrimination that a great many people living with HBV face on a daily basis. Hopefully the publicity this case generated will call attention to the stigma of living with HBV and prompt changes that help others who face similar issues.
An article describing Ms. Vo’s struggle to remain with her son in Australia can be found here.
Categories Uncategorized

ICE-HBV & partners are organizing a side-event at the Global Fund Replenishment Conference on October 8 from 1pm to 2:30pm. The session aims to underscore the potential public health impact of expanding viral hepatitis elimination programming, including through strategic integration with existing efforts to improve HIV care and prevention outcomes. To register, please contact [email protected]

The WHO 2019 report highlights the critical connections between efforts to achieve the global targets of elimination of viral hepatitis and reductions in HIV incidence and mortality. Service coverage of HBV and HCV testing and treatment needs to be rapidly scaled up. Hepatitis services need to be delivered through a public health approach to benefit all, including through strategic integration with HIV programming where it makes sense. Sustainable financing is required to enable universal health coverage. Innovations are also essential; new diagnostics, treatments, cure and vaccines are being developed. They should be tested and delivered urgently to transform the hepatitis response and attain the elimination targets.

– To highlight innovations in the viral hepatitis response that can have a wide public health impact and show how viral hepatitis elimination can contribute to Universal Health Coverage and to improving clinical outcomes for people living with HIV.
– To advocate for increased investments in viral hepatitis, including to achieve micro-elimination among people living with HIV and among key populations at risk of HIV, and beyond.
– To underline the feasibility of viral hepatitis elimination by looking at cost estimates, procurement systems and innovative financing. Due the existence of now affordable diagnostics and curative treatments for HCV, an effective and inexpensive HBV vaccine and the prospects for further innovations towards an HBV cure, enhanced investments made today can have a major impact on global health, within a short period of time. 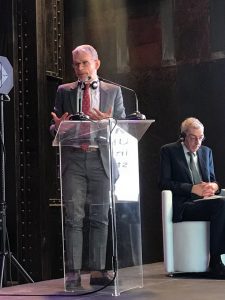 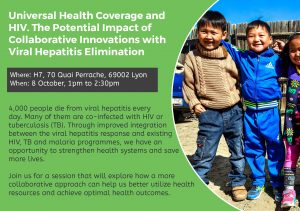 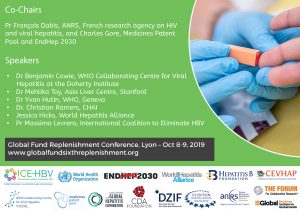